Longest serving mental health newsletter for you and more than 10,000 of your professional colleagues. Subscribe today! 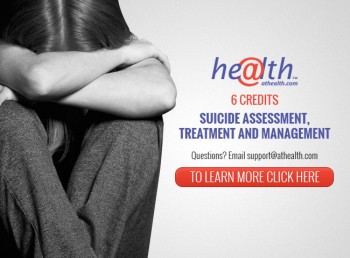 As a mental health professional, you know that suicide is a major public health concern. Death by suicide claims more than 40,000 lives each year in the United States, out numbering deaths by homicide. This course sharpens your clinical skills and helps you prevent suicide by knowing the risk factors and routinely assessing the individuals you treat.

1.  Scope of the Suicide Problem
Each of the sections below contain important suicide statistics for mental health professionals. Click on each link . . .

Suicide Deaths in the United States
Suicide rates by sex, homicide and suicide, and the geographic distribution of suicide.

Suicide by Age
Suicide rates by age, trends over time, and the leading causes of death by age group.

Suicidal Thoughts and Suicide Attempts
Rates of suicidal ideation and attempts by age and sex.

Means of Suicide
Data on the methods people use to end their lives.

2.  Suicide Toolkit for Behavioral Health Care
Every new client or patient is screened for suicidal thoughts and behaviors when health and behavioral health care organizations are committed to safer suicide care.
ZEROSUICIDE(dot)ORG

3. Netflix Drama About Teen Suicide Prompts Related Google Searches
Google searches using terms related to suicidal ideation rose significantly in the days following the release of “13 Reasons Why”—a Netflix series about a teenage girl who dies by suicide. The finding was reported that searches using the terms “how to commit suicide,” “commit suicide,” and “how to kill yourself” were all significantly higher following the series’ release.
AMERICAN JOURNAL OF PSYCHIATRY

4. Media Coverage As a Risk Factor in Suicide
As anticipated from social learning theory, the greater the amount of coverage of suicide in the media, the greater the increase in suicide rate.
NATIONAL CENTER for BIOTECHNOLOGY INFORMATION (NCBI)

5. Suicide and Suicide Attempts in Adolescents
Adolescents who initially may seem at low risk, joke about suicide, or seek treatment of repeated somatic complaints may be asking for help the only way they can. Their concerns should be assessed thoroughly.
AMERICAN ACADEMY OF PEDIATRICS

Suicidal clients are a difficult and challenging population in counseling.
This 2 credit, CE course contains 25 practical, hands-on strategies for counselors to assist in their interactions with suicidal clients.
The strategies are situated within a seven-step model for crisis intervention that is specifically tailored to suicidal clients.

7. Telepsychiatry as Part of a Comprehensive Care Plan
Justin had served in the military and completed a tour of combat Afghanistan, where he sustained a severe injury to his leg that ended his military career. He had been suffering from posttraumatic stress disorder and severe depression since his return home.
AMA JOURNAL OF ETHICS

8. Preventing Suicide: A Technical Package of Policy, Programs, and Practices
The strategies represented in this package include those with a focus on preventing the risk of suicide in the first place as well as approaches to lessen the immediate and long-term harms of suicidal behavior for individuals, families, communities, and society.
CENTER FOR DISEASE CONTROL (CDC)

9. Rising Suicide Among Adults Aged 40–64 Years
Suicide rates among middle-aged men and women in the U.S. have been increasing since 1999, with a sharp escalation since 2007.
AMERICAN JOURNAL OF PREVENTIVE MEDICINE

10.  The Safety Planning Intervention for Reducing Suicide Risk - Click here to register for this free event.
This free 90-minute webinar, led by Gregory K. Brown, Ph.D., is scheduled for September 20th. Although suicide risk assessments have become an established standard of care, brief interventions to address suicide risk in acute care settings are a recent development in evidence-based treatment of suicidal patients.
CENTER FOR DEPLOYMENT PSYCHOLOGY